Congratulations to Lau Tak Kin and Lau Tak Shing of 3C who won the Championship in the International category of National Danish Science Contest (Unge-Forskere) (丹 麥 國 家 科 學 比 賽) held in Aarhus, Denmark, from 27 March to 3 April 2008 with their project titled “21st Century Lock”(防撞鎖). They were awarded 500 USD and a certificate presented by His Royal Highness Prince Joachim and Minister for Science and Technology, Mr Helge Sander. Furthermore, 21st Century Lock would like to donate half of the cash prize to MFS.

Last but not the least, we would like to express our deepest gratitude to our alumni Mr Ku Kwok Kit and the businessman Mr Hui, whom kindly sponsored for the air tickets. 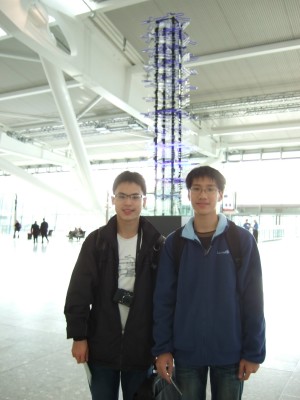 Get balance with two wheel

Have fun with Anti-Bump Lock

Revision of Form Test @ Train from Aarhus to Odense, Denmark